We had the best social studies learning time today! It was spectacular. I know I always say I wish I had a videographer, but wow, I really wish I had one today. My girls were fantabulous — full of energy, passion, and awesomeness.

We are part way through our super hero unit. We’ve explored fictional super heroes, and created our own personal fictional superhero. After numerous discussions, we decided there aren’t just fictional superheroes, there are also real superheroes! We generated a list of superheroes in our own lives. They included: police officers, firemen, firewomen, grandmothers who get up early every day to make us breakfast, sisters who help us cross the street, dogs who bark at bad guys, teachers who teach us, dads who give us medicine when we’re sick, and nannies who always play games with us.

Today’s topic was  how we can be, and are, superheroes. I planned on showing them Brad Montague’s (Kid President’s brother-in-law) video This is a Joyful Rebellion, and then work on Mirror Messages as a way to give them concrete examples of them being superheroes.

I told them we’d be watching a couple videos this week. I mentioned Kid President and his pep talk for superheroes. None of them had heard of him, so I pulled up a quick photo to show them. They were enamored with his image, the fact that he is a kid, and the idea of a pep talk. They all wanted to watch him TODAY! They were quite emphatic.

I thought for a moment. I wasn’t prepared for an activity for this video, but they were definitely into it, so I decided to give it a go, and see what happened. I asked them “So you want me to change my plans so we can watch this today?” They responded, enthusiastically, “Yes!” I paused, thought a moment and said “OK, let’s watch it, and then talk about it.

OH MY GOSH!!! They got so much out of the pep talk! Their observations, insights, and discussion were amazing.

One said: “But Miss James, we can’t be REAL superheroes!”

I took a breath, put my hands on my hips, thought for a moment, and said “What do you mean?”

She repeated herself: “We CAN’T be real superheroes, Miss James!” and added “We can’t fly.”

As I began to explain that Superman isn’t real, but is a movie and comic book character, another girl interrupted. She practically yelled …

“But they’re NOT REAL! They’re FAKE!”

She continued “We’re real, and we can be REAL SUPERHEROES. We don’t need to be able to fly, or shoot lasers out of our hands”

“YEAH!” another said “And we don’t need to have laser eyes!”

“That’s true! We don’t have, or need, lasers hands or eyes!”

Now came the big question. “So if we don’t have laser hands or laser eyes, and we can’t fly, do we have super powers?”

Their eyes seemed locked on me as they struggled with that question. The room was completely silent.

Finally, one yelled, “YES! We do have super powers!”

“We have heart power!”

I cheered them on as they continued. We have:

“Wow!” I said “This is fantabulous! I think we have to make signs with our powers. Shall we use big or small sheets of paper?”

Of course we had to use big paper. What was I thinking? Their powers, their hearts, their minds, their spirits, DEMANDED big sheets of paper. What else could even come close to holding them?

We each got our favorite color 12×18 inch sheet and set to work writing and illustrating our powers.

After social studies, we had choice time. One of the girls asked if she could work on our 120 chart — we had begun constructing it during math. “Sure! How many numbers do you want?

She took two and placed them in the chart. Then she took a handful. A moment later she said, “I want to finish the whole thing!”

40 minutes later the chart was completed!

We sat and looked at it together. “Wow,” I said, as we high-fived. “That is so fantabulous! Thanks for using your math power to help us get this done.”

I’m sure social studies would have been good if we followed my plan to the letter. But, I’m also sure it wouldn’t have been this good. And I have no idea if this girl would have had the confidence in her power to finish this chart on her own. My decision to allow my students to lead me — to step into the unknown, trusting in them, me and us — made all the difference.

I’m so glad they asked to lead, and I’m super glad I said yes, and followed them.

One of the first articles I wrote about when I was getting my MA Creative Thinking was In Praise of Convergent Thinking, by Arthur Cropley.  I was a fan of divergent thinking, and praised it often! I was intrigued by the idea that convergent thinking should be praised in creativity, as well. After reading his article, I agreed! Convergent thinking and knowledge are  super important parts of creativity.  Look: “In the area of convergent thinking, knowledge is of particular importance: It is a source of ideas, suggests pathways to solutions, and provides criteria of effectiveness and novelty.”  (Cropley, 2004, p. 2) Makes sense, right?

Then I discovered the work of Teresa Amabile — among other things, her componential theory of creativity. In a working paper summary from 2012  she writes that the componential theory of creativity “specifies that creativity requires a confluence of four components: Creativity should be highest when 1) an intrinsically motivated person with 2) high domain expertise and 3) high skill in creative thinking 4) works in an environment high in supports for creativity.” (Amabile, 2012) Domain expertise includes, — you guessed it — knowledge.

I spend a ton of time outdoors and enjoy playing around with plein air watercolor painting. The other day, I stowed my new travel water color set — 24 colors — in my backpack and set out. Reaching the summit I broke the kit open and began. I quickly realized there is a plethora of different colors in nature, and I wasn’t sure how to create them from my 24.

What was I to do?

Funny, at that moment, I saw the beautiful faces of my kindergartner artists asking me the same question. I told myself what I tell them. “Do your best and don’t fret!”

I wasn’t sure how to make the many colors I saw, but I did my best. I had a blast! I looked at the beauty before me for a long time — soaking it in. I sketched some rough ideas, and looked some more. I noticed shapes, colors, gradients, clouds, glints of light and much more. Finally I picked up my brush, made my best decisions, and ended up with a rather pleasing product.

But, I hadn’t forgotten what I’d learned from Cropley and Amabile, so when I got home I got out some sheets of watercolor paper, created a grid, opened my watercolors, poured myself a glass of sparkling water, and set to work. I was amazed, and really quite surprised, by the colors that were created when I mixed the paints.

This chart contains the colors obtained by combining only two colors at a time. Imagine what might happen if I mixed more than two at once!!! Or, just think how much more I might learn by contemplating the chart and noticing characteristics about each color.

The possibilities are endless. 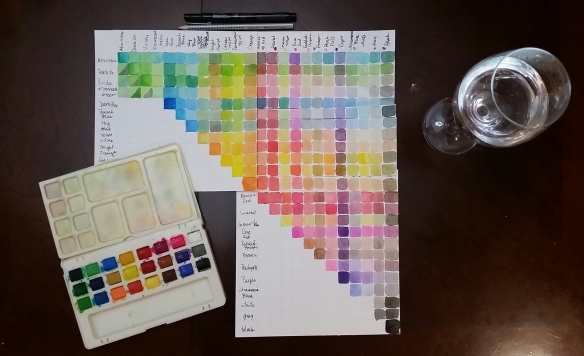 This was such a simple, pleasant lesson about the importance of convergent thinking and knowledge for creativity. Of course I can be creative with the knowledge I already have. I understand some things about color theory and how colors combine. But, I learned so much by doing this work. I have no doubt it will impact me next time I paint. I’m excited to see how this will increase my creativity — not my talent — but my creativity.

To further sing the praise of convergent thinking and knowledge, several times I had to use them as I created the chart. I would absent-mindedly move to wash my brush in my sparkling water, and once even lifted the brush-washing water glass towards my lips! Thank goodness for convergent thinking and knowledge which reminded me that it might be unique, but not at all useful,  to wash my brush in my sparkling water, or to drink the brush-washing water that was in the small glass!