The girls and I worked on making banners this past week. We each worked on our own creation, sharing space, materials, tools, and energy.

It was a choice based activity — join me for the project if you like, don’t join me if something else brings you more joy. The choices continued as we worked on the project.

A friend gave me three plastic mason jars of washi tape for my birthday. She hoped my girls and I would create something beautiful together. I shared the tape and information with my girls. I told them my friend was curious and excited to see our process and final product. They seemed energized by the information and my sharing of my gift with them.

The makerspace was blazing with creativity, bravery (trying all sorts of things), negotiation (Can I borrow your scissors? Can someone start this washi tape for me? I want that tape too, can we share?), imagination, collaboration, (I can do that! Do you want me to help you?), thinking, sharing of ideas, physical work, laughter, and joy!

At one point, one of the girls brought me her tray and banner.

“Would you string it for me?” she asked.

Invent another project?! How fantabulous is that?!?!!! I made a split second decision to lend her my hands to string her banner, so that she could use her hands to do something more important.

I responded with a big smile, and a good deal of enthusiasm. “ABSOLUTELY!”

She responded with a small smile. Her eyes locked with mine for just a second. Then she moved off to begin her invention.

I love that the gift of washi tape to me, and then to my girls, combined with freedom and joy produced such beauty! Beautiful banners. Awesome experiences. Desire and empowerment to invent new projects!

January 17th is Kid Inventors’ Day.. It’s held on the 17th to coincide with the birth date of Benjamin Franklin — an imaginative and creative inventor. (Check out the link to find out about some of his inventions. There’s even a video of William Zeitler playing  a modern version of Franklin’s glass armonica. It’s pretty cool!)

Prior to the big day we read What Do You Do With An Idea by Kobi Yamada. It’s such a great book — simple and yet profound at the same time. We talked about ideas — theirs ideas.

“Do you have ideas? Do you have good ideas? Do your ideas always work the way you plan? Do you always have ideas alone, or sometimes with others? Are you always willing to tell others about your ideas? Are you sometimes a little worried people may not like their ideas?”  I agreed with them when they said they had ideas, and I encouraged them when they said they are sometimes afraid to share or try their ideas.

Then I showed them my latest invention — an idea book I made for them!

“Yes, I know a book isn’t my invention, we already have them, but,” I said, “this one’s a little different. I wanted  to give you all sorts of places to write, sketch, and store your ideas so I changed some things about a ‘regular’ book.” 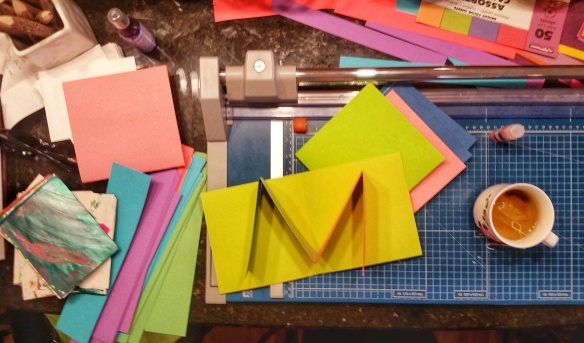 I proceeded to show them some of the different bits of the book — skinny pages, fat pages, pages made from magazine pages, an envelope, blank white paper, blank grid paper, and accordion folded pages in the center. I told them the books were theirs to keep, and they could use them however they liked to store their ideas. The only thing they had to do was record some ideas.

I also asked them to let me know, after they used the book, if they had any tweaks I might make to make it even better. The book was so different that many immediately asked me to make changes. I asked them to try it first, and then let me know if they still wanted me to tweak things. “This way,” I said “we’ll all be part of the invention process of this Idea Book. I made it, but you’ll test it, and give me suggestions.” They seemed to like that.

Kid Inventors Day in the classroom was great. The girls were enthusiastic and worked on their projects for hours.  Some of their creations were completely unique, others were recreations of existing items. There was a lot of creative questioning that went on that day! How would their creation be an invention — something new? What tweaks could they make to whatever they were considering to make it even better? One young inventor declared her jet pack better than the existing one because it used Daddy-power. “Because, ya know,” she told me, “my mommy won’t let me use fire and real fuel!” Can’t argue with that logic!

The day was a success, but I wanted them to concentrate on problem finding a bit more. I decided to have us work as inventors in our next science class. We would concentrate on the first 3 steps from this  Invention and Design Process Mash Up poster I put together. (The 1st 3 are in color because those were the ones I wanted to focus on in this class.) 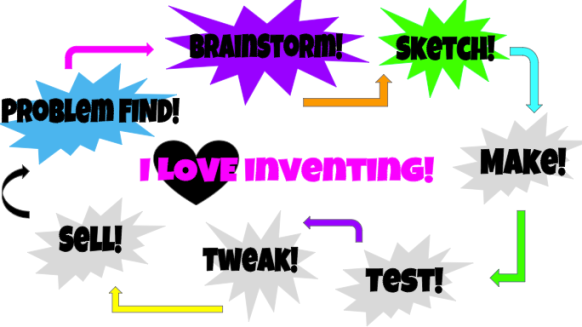 I had some questions and wonderings as I entered the lesson design process:

I was kind of plagued by the question of wether they should have their own notebook because then they would have something written down to take home. Normally I don’t really care.

I know that learning happens in the making, the doing, and the discussion, so I typically don’t do concentrate on a notebook to take home. I’m not against writing! Tons of amazing things happen with writing, but generally I don’t mind if there is nothing to send home on any one day since I document with photos, and share the photos and explanations after the fact. But for some reason this time I couldn’t shake the idea of an “Inventor’s Notebook” to take home. So, I gave it a go.

I loved our discussions. The girls were enthusiastic and worked hard to understand and express themselves.  It was a ton of  fun to watch them try to explain what brainstorming is — using great facial expressions and hand gestures to explain that the thoughts you have are like storms in your brain.

“”Yes!” I said “You do have lots of ideas in your brains, but how do they become brainstorms? What happens when it storms outside? Is there just stuff in the clouds but nothing else?” “NO!” they yelled ” It rains! Or it snows!” “YES!” I replied, with nearly equal exuberance, “And is it just one rain drop?” They looked, as though stunned, but then responded “NO! It’s lots of drops!” “YES!” I agreed, “It’s lots of drops, and when we brainstorm, we want to share LOTS of ideas.”

The inventions we looked at were awesome. They helped the girls understand that sometimes inventions are a mash up of ideas already existing, and other times they are completely new. And, perhaps most importantly it opened their minds to the truth that KIDS are inventors — with big beautiful brains and hearts — who see problems and work to solve them. We looked at the cereal serving head crane device as well as fabulous, and hilarious, children’s inventions. (Can you imagine having a spider lick your face if you don’t get up on time?! They could!)

My prototype for the next try will include a notebook for work at home. It will include the mash-up poster, some information for parents, and some blank pages for sketching and note taking. But, for our time together in the lab, we will work with posters and post-it-notes.

We’ll create several Problem Posters. Then, after some brainstorming, I’ll arm each girl with a pad of post-it-notes, and a pencil. This will give them the opportunity for many casual collisions, which will oblige and allow them to interact — sharing ideas, energy, laughter, and angst. Hopefully the size of the note, and the fact that they have a pad of them, will encourage quick sketching, and many ideas. I’m excited that this method  will give us a class artifact of our work together. I’m hopeful it can then be used for further thought and engagement in the invention and design process.

Funny, even though I understand the design/invention process, and I know the girls learned and did great things, I’m unhappy with myself for not thinking  of these tweaks before I did the lesson. But really, how could I have thought of them before? It’s a new lesson, a new creation and invention, and as with all inventions, it gets better by working the process. — think, sketch, make, test, tweak, sell, repeat.

Perhaps we as educators need to share more of our failures, near misses, thought process, design process, thinking, and challenges. This way everyone will understand that everyone needs to work the process, and the process is hardly ever as easy, or mess free, as we make it seem.