I read to my Kindergartners everyday at lunch. It’s always an adventure in listening, laughing, noticing, discussing, wondering, and, frankly, making proclamations.

Yesterday one of the reads was Happy Dog Sizzles by Lisa Grubb. Part way through the story, the characters begin creating. Lisa used the term “junk” to describe the things used by her characters. She did not misspeak. In many ways, the items being used could be characterized as junk — a broken instrument, a broken lamp, an old hat.

As I read the word junk, one of my girls proclaimed, “That’s not junk!”

Her: “No!” she replied emphatically. “That’s maker-stuff!”

Her voice seemed to call more of her peers to the page. All about the room there were echoes of agreement. “Yeah, that’s not junk. That’s maker-stuff!”

Me: (heart glowing with love and pride in their fantabulousness) “You know what? You’re right! It is maker-stuff!”

I read the rest of the book substituting maker-stuff for junk.

My Kindergartners are right. It’s all about how we look at it.

As I considered a photo for this post, I gathered up some things forgotten in the back of drawers, or placed in the trash/recycling bin — contact lens containers, a pebble from a walk, a bottle top, the inside roll from tape, an old marker lid, part of a security envelope, the top of a canning jar, a bent paperclip, and an old hair tie. 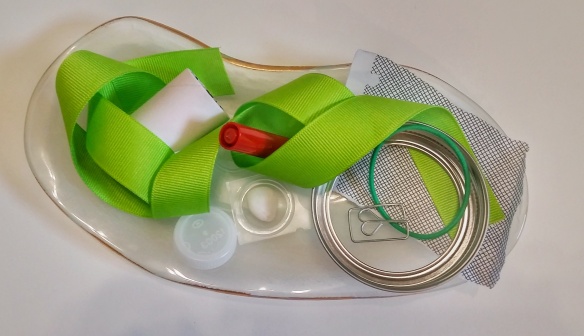 With my Kindergartners words and emotions fresh in my mind, I interacted with these items, not as junk, but as items with untold potential.

I purposefully staged the photo. I considered each piece, and placed it carefully on a gold-lined dish. I created pleasant ribbon swirls. I arranged and rearranged the items several times until I was satisfied. Then I photographed and processed the image to emphasize the feeling of importance, beauty, and art.

My kindergartners were right. In our awesome hands — animated by our big beautiful brains, fantabulous imagination, and spectacular hearts — it’s not junk, it’s maker-stuff.