I was inspired by a colleague to truly make my word wall interactional – student driven and written. It’s a whiteboard, so it’s easy to revise. I erased everything I had on it, and moved it a bit closer to the floor. They would still need a chair to write at the top, but they could do it!

They got papers and set to work with enthusiastic determination. As each finished, they shared their list with me. We worked to spell each word the way it was in a library book. Sometimes we worked harder at hearing sounds and encoding them. Other times we recalled spelling rules and combinations. Still others times I asked permission to show them how it would be spelled in a library book.

Finally, they joined me at the wall and added their words. It took us a few days to get all the words written, but it was worth it! It was such a joy to watch them work, and to work with them.

They reached as high as they could to add their words.

And the words they chose were …

I cannot think of an adequate descriptor …

Take a look at two of the word lists. 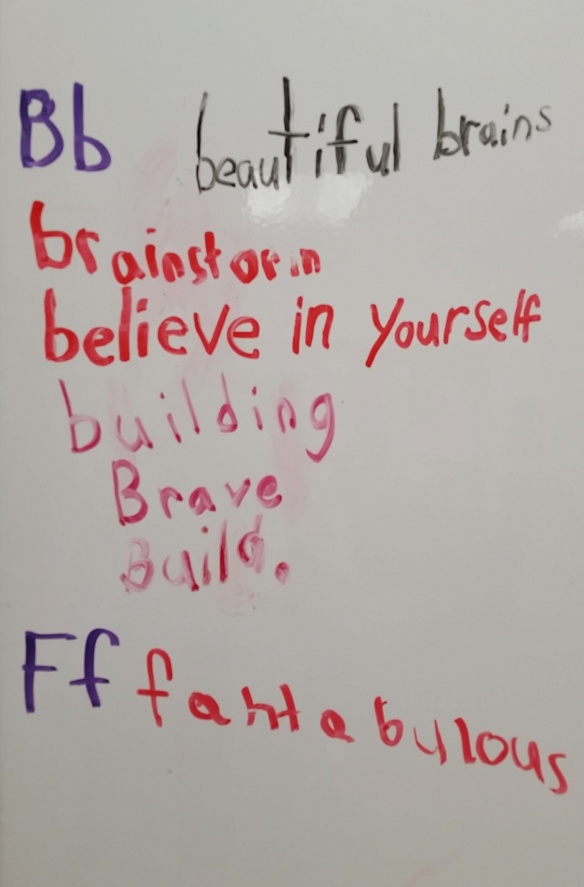 Yes, there are sight words on the wall such as  — we, and, of — and other words they know and enjoy like — candy, cup.

But the wall is filled with things I have said, written and encouraged!

One student wrote “I’m possible!” as an Ii word. It’s a reference to the statement “Impossible just says ‘I’m possible.”

Are they listening? Yes, they are!

You might be wondering about the word fantabulous. You may not find it in a dictionary, but it is a word in our classroom. I made it up a few years ago. It’s a combination of fantastic and fantabulous — two words I say with some regularity. One day, while chatting with the kids I said it’d be great if there were a word that was both fantastic and fabulous … like … FANTABULOUS!

It has joined the lexicon of our classroom, and appears to be moving on with the students and their families. Soon, perhaps, it will be found in the dictionary!